Not had much radio time since Saturday due to family duties but did managed to find time to edit down some of the audio from the 144MHz SSB Amateur Radio Contest I received.

The first part of the audio was from the FUNCube Dongle, the latter part from the Ultra cheap NewSky DVB-T stick running the RTL-SDR driver.

Both were received using the loft mounted discone antenna which I believe is vertically polarised and so wasn’t optimal since SSB is broadcast using horizontal polarization. Even so I was quite impressed with what I did receive with such humble equipment.The stations calling in the audio were G0VHF (morse and voice), M0KWP, M0BAA, 2E0KWM and G4SIV

Please note the corruption that can be heard toward the end of audio appears to be an artifact of the sound editor and/or the transcoding used by soundcloud as it wasn’t in the original audio.

As it’s the weekend I have managed to experiment with my new SDR device. I have sorted out an adapter so I can connect it to the loft discone and it has been pulling in some very nice clear signals. I have had to do some tweaking especially of the usb transfer buffer size to get some decent audio out of it. I have also had to learn how to use the HDSDR program which I haven’t used much before favouring the SDR-Radio one with the FUNCube Dongle.

One thing that caught me out is that when I last used HDSDR with the FUNCube I had to swap the I and Q signals and I don’t need to with the Newsky Tv28t so initially I was very confused as it all seem arse about face! Duh! But now actually growing to quite like it as having a much wider spectrum to see is very nice.

By a pleasant coincidence yesterday saw the start of the RSGB 144MHz May Contest so lots of SSB transmissions to tune in to. The FUNCube definitely has the edge when it comes to quality of audio and sensitivity and being able to tune down the gain helps in preventing out of band signal overloading the front end. With the Newsky device I’ve had to have the gain right up most of the time, but I suspect there is still more optimising to do.

Just a small video showing some of the SSB Contest signals on the spectrum. Don’t you just love the masses of noise? Really must do something about that damn router!

I’ve also got to discover how to calibrate the Newsky as it shows quite a bit off frequency, I understand I need to discover the actual crystal clock frequency and can feed that into the EXT-IO plugin.

As suspected the problem was indeed the computer. I rushed home at lunchtime and in less than 10 minutes I had installed the software on my main PC and it sprang to life just like the video promised.

I only had a short time to try it out, but picked up some FM stations, pager signals and the RAF Waddington ATIS which should have been on 291.675MHz but the frequency on the HDSDR screen was way off.

It does appear to be a little deaf but I hadn’t got a decent antenna connected so I won’t conclusively say that yet as I’ve got to make up an adapter this evening so I can connect the loft antenna on. Also the EXT-IO interface has a gain control that I didn’t alter from the default. 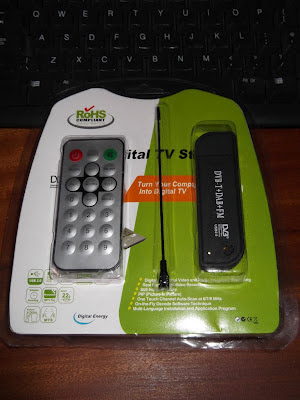 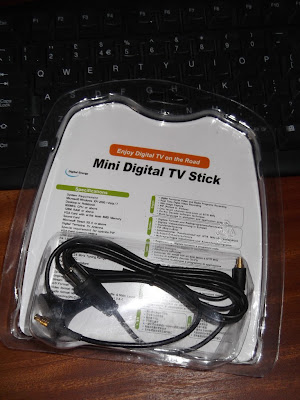 Well that was quick! The USB Receiver with the RTL2832 receiver I ordered it on Tuesday afternoon and arrived yesterday (Thursday) morning (from Jersey based retailer Cosycave via ebay) so was eager to try it out last night.

Fired up the old laptop and went off to http://www.rtlsdr.com/ and the getting started section to download the drivers and software and everything seemed to be going well. Following the instructions the device appeared to be correctly detected and the appropriate drivers installed, but then it went pear shaped.

HDSDR would open, the EXT-IO window would appear and attach to the device but as soon as I tried to tune the stick or start receiving various errors would appear and nothing worked… I tried a number of different option settings but still no luck!

Feeling a bit disappointed I put it down while I watched some TV and tried again later. I uninstalled everything and went through the process again but still ended up with the same errors.

I decided to rule out a defective receiver so I uninstalled everything again and installed the manufacturers supplied software.

The drivers and something called BlaseHDTV installed without a hitch. I connected the little supplied antenna to the receiver and set off scanning for TV and radio stations. It didn’t complain but found nothing! By now it was well past midnight so I went off to bed in a huff.

This morning I connected the receiver to the roof aerial and it did find TV channels from the two local transmitters Waltham (60% signal strength and 100% quality) and Belmont (low signal strength and quality) but when I tried to watch anything I just got random coloured blocks and random noise. Interestingly it didn’t find anything using the DAB or FM radio applications.

So is the receiver defective? Unlikely as it did go away and find TV channels.

The culprit is almost certainly the computer. Being an untrusting soul when it comes to software ‘off the internet’ I didn’t want to try any of this out on my main computers in case it messed anything up. However the laptop is an old Sony Vaio with a Pentium 4-M processor and only 512MB of RAM and can be prone to sluggish behaviour, especially when trashing the hard drive. Saying that it will happily run SDR-Radio with the FUNCube Dongle.

Checking back over the specifications of the receiver it clearly states on the packaging that it requires a USB2.0 port… mmmm the old laptop only has USB1.1! Unfortunately I have grown accustomed to ignoring the pop-up balloon which appears I plug something in…

The looks like the most likely reason for the problems, not enough bandwidth – which would certainly explain the DTV issues. So I will have to try it on another PC…

As Captain Picard would say!

Over the last few months various forums and websites I visit have been buzzing with conversations about the RTL-SDR project (e.g Hackaday)

Sound familiar? Yes it is similar to the FUNCube Dongle.

There are a couple of limitations, unlike the FCD the device doesn’t have a pre-amplifier so sensitivity might be limited. The IQ sampling is only in 8 bits so the dynamic range will be limited, but because the device doesn’t use a USB Soundcard interface like the FCD to pass the IQ samples to the PC the sample rate can be much higher (theoretically 3.2 MS/s) which allows potential decoding of wideband signals which the FCD cannot do.

Over the last few week I have seen a few Youtube videos and read of peoples experiments so my curiosity was piqued and decided to get one to have a go.

There in lies the problem, since news of this hit the internet demand for suitable devices has rocketed and dealers are cashing in and prices have risen and stocks are low. Also as not every USB FM/DAB/DTV receiver has a suitable chipset it is very easy to buy one that won’t actually work. There is a list of known working devices here and yesterday while browsing ebay I found a dealer claiming to be selling the Newsky TV28T for around £16 including postage so thought what the hell!

Should be arriving in the next few days so I will keep you posted!

Before I go I should point out that on some forums and discussion groups I visit that some are under the illusion that they are getting a high quality wide band receiver for peanuts and then have complained because they have got a unsupported device or don’t understand how the software works. I am under no illusions it will undoubtedly be fiddly, unreliable and inaccurate but it should be FUN!

If nothing else I will have a way of listening to DAB and watching DTV on my PC, which is hopefully better than my last purchase (which I should really dig out and check what chipset it has!)