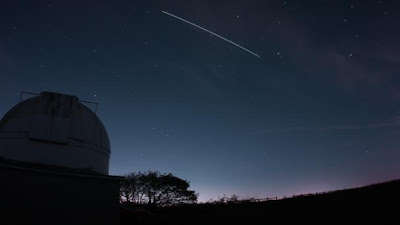 Tonight and tomorrow see the Quadrantid Meteor Shower (article on Telegraph website) Nasa scientists are predicting the morning skies are this week set to be filled with hundreds of shooting stars in the year’s first meteor shower.

Recently I have been reading up on amateur Radio Astronomy, one easy project is the detection of meteors using radio scattering.

On the British Astronomical Association, Radio Astronomy Group website there is an interesting project (a  PDF download) which demonstrates how to use a FUNCube Dongle to detect reflection of the Graves Space Surveillance Radar signal from ionisation trails.

The Graves French space surveillance transmitter located near Dijon, operating on a frequency of 143.050MHz the FCD was capable of receiving the weak backscatter echoes from meteors, indeed I experimented last year and with a simple antenna  picked up many squeaks and whistles from the normal ‘background’ meteor activity.

So I’ve set up my equipment again and will be doing some recording overnight.in the hope of a barrage of strange noises!