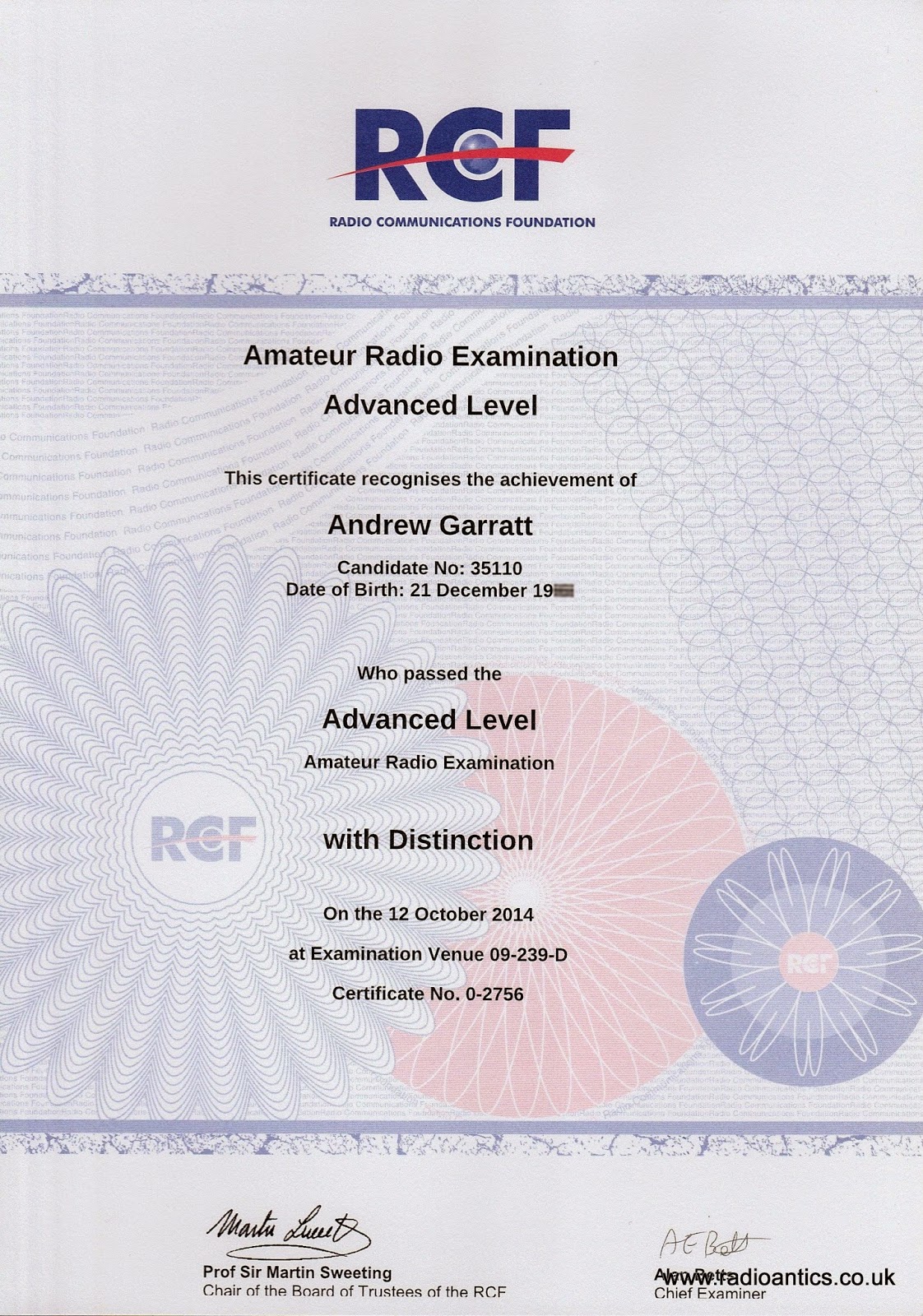 I now have a full licence and a new call sign M0NRD.

I sat the advanced level examination held during the RSGB Convention on the 12th October. The results were due at least six working days later so wasn’t expecting to know how I had done till this week so I surprised when the certificate arrived on Saturday morning and was over the moon to discover I’d passed with a distinction.

I only decided to apply to sit the exam last month. Regular readers may have missed the announcement as it was an after thought at the end of another post.

I became a licensed ‘foundation level’ radio amateur last September (M6GTG) and an ‘intermediate’ (2E0NRD) in May this year. It was a bit of a bold decision to attempt the final stage as I hadn’t been actively studying for it. There have been many people who have progressed in a shorter time but going through the levels in just thirteen months is a big undertaking especially when time and concentration is taken up with work, career and domestic commitments.

After a cursory glance at the syllabus and a quick leafing through the RSGB Advance! book I had decided while there were quite a few areas that I didn’t know in depth the electronics theory and mathematics were okay due to my higher education background (though it has been 26 years since I left University) so I just needed to fill in the blanks.

After posting off the application the plan had been to spend the month going through the book, learning, refreshing and revising the subjects as necessary. Of course I got sidetracked and distracted so it got left it to the last minute, well in fact to the week before the exam.

As soon as I started studying properly I soon realised I’d seriously underestimated the amount of details and facts that I need to understand and recall. I knuckled down and despite doing full days at work I studied in the evenings, making notes, working the questions on the Hamtests website and in the QADV program and gained confidence of getting at least the 60% pass rate. I tested myself on the QADV practice papers and mock papers on the RSGB website and seemed ready.

I had intended to be at the RSGB Convention proper however I agreed instead to spend that weekend at the Mother-in-laws in Cambridge and drove over to Milton Keynes in thick fog on the Sunday morning.

The actual exam seemed reasonable there were a few head scratchers and several questions on topics I suddenly found myself unsure of. I took my time deliberating and checked every single ‘licence condition’ question against the supplied licence document even if I thought I knew the answer. Double and triple checking questions, values, calculations and answers and with 10 minutes of the alloted time remaining I had filled in the marking sheet and made a quick exit in time to get my Sunday roast dinner.

I had left confident and reasonably happy but over the next few days doubt inevitably started setting in. I kept remembering questions.. had I got that one wrong? I resisted the temptation to check the text book and keep thinking well it is only 60% I need…

To achieve a distinction was very satisfying, a lot of people have said they expected me to walk it but self doubt and a lack of self confidence is something I have suffered from for many years. When I was a spotty student I would probably have agreed but now an overweight, slightly befuddled middle aged man with greying hair you do have your doubts.

I would like to thank all those people who have congratulated me and those who have encouraged me along the way and wish everyone studying and taking the exam in the future the best of luck.