A few weeks ago I read a news article about the miraculous reactivation of LES1, this satellite was built by the Massachusetts Institute of Technology and launched back in 1965. The satellite failed to reach its intended orbit owing to a wiring error and has been drifting out of control ever since, it was abandoned in 1967 as a piece of space junk but has seemingly begun transmitting again after 46 years.

Back in December Phil Williams G3YPQ from Cornwall noticed a peculiar signal and after some research determined it was LES1. The odd signal is probably caused by the satellite tumbling end over end every 4 seconds as the solar panels become shadowed by the engine. ‘This gives the signal a particularly ghostly sound as the voltage from the solar panels fluctuates’ Phil says. It is likely that the on board batteries have now disintegrated and some other component failure has caused the transmitter on 237Mhz, to start up when its in sunlight.

Eager to see if I could receive this ancient satellite I dug out an unused DAB 3-element antenna and mounted it on a tripod and successfully monitored two passes this afternoon. 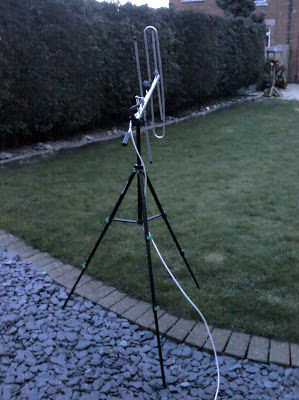 I used my FUNCube Dongle (original version) and SDR-Radio V1.5 and this was the analysis of the resulting recorded IQ file for the pass that started around 17:30pm. You can clearly see the satellite signal as it undergoes Doppler shift and the four second regular frequency shift caused by the tumbling. 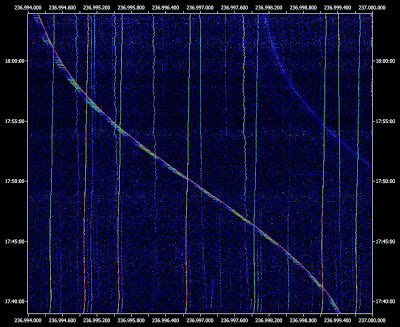 At its most northerly latitude the satellite orbit passes over North Africa, but due to its height has a longer orbit period than most other satellites and is receivable over much of Europe. How long it keeps transmitting is a mystery.

listen to ‘LES1 Signal’ on Audioboo