b3ta.com come up with the goods once again

A bit of comic relief from Tart Monkey on B3ta.com

Jon Stewart of The Daily Show pokes fun at Gordon Hope Foot and the Yes We Can Five on their recent US tour.

There is a classic line in that scene “We’ll make it past the cops. I just hope we don’t see no Muslims.” Sort of sums up the UK’s foreign policy for the last 6 years.

Brown has got his work cut out convincing people as to his motives for travelling to the US. Not least today’s newspaper cartoonists.

It didn’t take long for the b3ta boards to latch on to the RyanAir fiasco.

I am an infrequent visitor to The Daily Mash a satirical website covering current news with spoof stories, commentary and opinion. It can be a bit patchy and puerile (nothing actually wrong in that) but when I am feeling a little jaded with the world it sometimes makes me smile, like today.

A selection of recent articles.

RYANAIR PLANES TO SMELL STRONGLY OF URINE AND FAECES
Tom Logan, a frequent flyer from London, said: “I’m really looking forward to loading up on curry and Guinness and then going off like a muck spreader the next time I fly to Bratislava.”

BROWN REFUSES TO HAND BACK PENSION
Martin Bishop, head of pension rows at the Institute for Studies, said: “It’s a fascinating dynamic. The politicians blame the bankers, the bankers blame the politicians, and the ordinary taxpayer is down on all fours with a confused look on his face, being f**ked at both ends.”

GAIL TRIMBLE TO BE BURNT AS A WITCH
Emma Bradford, a terrified sales manager from Leeds, said: “How could any woman who is not the carnal chew-toy of Beelzebub know so many different things?

CLARKSON FACTUALLY CORRECT
“Or if he had wandered around the stage with one eye shut, bumping into things while sticking his tongue inside his bottom lip and banging the backs of his hands together while screaming ‘och aye the noo, I’m Gordon the spazzy’, then yes, that is perhaps going a bit too far.”

Wil Wheaton, the actor infamous for the hideous sweaters he was forced to wear as the annoyingly smug Wesley Crusher on the Starship Enterprise (and incidentally his brilliant performance in Stand By Me) has for many years written an excellent blog full of his experiences of life, humour and observations.

One of his recent posts made me smile, here in the UK we are preoccupied with the self destruction of the government under the leadership of Gordon the Moron, but the US is also having it’s own problems deciding who will be their next leader. Whilst am I not convinced by Barack Obama’s particular brand of evangelism it is clear baring divine intervention that he has won the right to stand against John McCain. Hillary Clinton should admit defeat and stand aside. As Wil writes

The thing about all of this is that, with a Clinton victory in the primary about as likely as jumping off the roof of your house and landing on the moon, it’s become clear that this whole thing isn’t about Democrats or beating McCain (who is inexplicably running for Bush’s third term) or saving our country from the catastrophic failure of the Bush years. No, it’s all about her. It’s about her ego. It’s about refusing to admit that she did her best, but voters (except those encouraged by Rush Limbaugh to cross party lines and f**k with our primary) have pretty clearly said “No thanks. You’re a good senator, but we want something different now.”

It’s been crystal clear for weeks, yet she refuses to put party and country over personal ambition and drop out of the race, forcing Barack Obama to not only run against McCain and the Media, but also against her. It’s particularly galling, because she can only win if her campaign can force Democratic superdelegates (one of the worst creations in the history of politics) to tell millions of Democratic voters — many of them first time voters who, like me, finally feel truly inspired by someone — to go f**k themselves.

He also mentions and links to this wonderful parody on madatoms.com which compares Hillary to a psycho ex-girlfriend

It’s 2:31 AM. The Democratic Party is sleeping peacefully when it hears its phone buzz on the night stand. It rolls over and sees “Hillary” on the caller ID. It pauses briefly, considering pushing “END” and not dealing with this shit tonight. The thought is appealing but the Democratic Party knows that if it doesn’t take this call, another one is only minutes away.

DEMS: C’mon Hillary. Enough with this.

Hillary: Don’t you get it? You NEED me.

DEMS: No, I don’t. It was fun while it lasted but I’m with Barack now. I made my choice, it’s done.

Hillary: You can’t really mean that. How can you say that after all the good times we had?

DEMS: To be honest, I started hanging out with you because Bill’s pretty awesome.

DEMS: No, you’re not. Bill is charismatic, inspiring, and gets me really good weed.

DEMS: I’m going back to sleep.

Hillary: No, no, wait. I’m sorry, I didn’t mean that. Listen… there’s still got to be a chance. Remember when people told George W it was all over. When the numbers were against him?

Hillary: Remember?! And remember how everyone said America didn’t really want to be with George W? But they stuck it out anyway?

Hillary: But WE’LL make it work. Forget Barack, baby. Just take me back and we can forget this ever happened.

Hillary: …I’ll see you at the convention.

DEMS: No! Hillary I told you…

I love the writings and work of Charlie Brooker. He writes for the The Guardian newspaper and he covers many diverse subjects in his comment is free column as well as writing reviews and opinions of television. His observations are often incisive and thought provoking as well as being very amusing.

In his latest article he talks about the sudden realisation of self and being alive, or as he puts it “Those late-night moments of lurching fear, of existential nausea, of basic ‘I’m alive!’ horror”

Well worth a read. 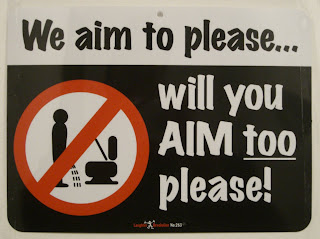 This particularly patronising sign greeted anyone using the gents toilet at a local equestrian centre. If they really aim to please then I would ask why the toilet lacked paper either for wiping or drying your hands and no hot water!

These signs your idea of sophistication and social commentary? Like to spend your holidays shopping in Blackpool gift shops? Then pop along to Laughter Revolution as you might expect it’s done in flash and has a particularly irritating introduction splash screen.

Also it occurred to me that there are container ships traversing the oceans of this world loaded up with this sort of rubbish made by some poor souls in China. The quicker Gaia gets her act together and wipes out the human race the better.