Well it was busy weekend and managed to achieve some of what I hoped to.

On Saturday morning I had a trip up to Lincoln to visit the Lincoln Short Wave Club I have for some time been considering taking the plunge to get an Amateur Radio Licence and I’d inquired about any foundation courses and exams they were holding. The secretary contacted me as there is the chance of course in the near future so I popped along to have a chat. It wasn’t the best weekend as they were preparing for the RSGB SSB Field Day Contest but I had chance to make contact. I would have loved to stay around watching/helping them set but I was visiting my family in the afternoon.

During the visit I got chatting to my brother, who has inherited some of interest in radio, and convinced him to lend me his currently disused discone antenna, more on that later.

I also retrieved my old Binatone Worldstar radio which I got one Christmas as a child and got me well and truly hooked on the hobby. It doesn’t quite look at pristine as this one as it was heavily used and abused during my childhood. It lost it’s distinctive world map timezone cover, the handle, antennas and earphone socket were broken and clumsy repaired and it has spent nearly two decades in my late fathers shed/workshop. To say it is looking a little bit worse for wear is an understatement but I hope to restore it, it will never be back to it’s former glory but it would be nice to honour those childhood memories.

On Sunday I did have a good clean up in the workshop, things are packed away in boxes and stored on shelves now, at least I can now get into the workshop without clambering over junk and can find tools now!

During the afternoon I left the scanner and pc monitoring the ARISSat-1 frequency and got this image on the late afternoon pass. 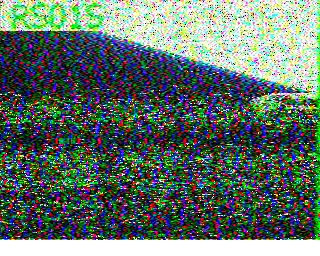 At the time of the pass I was actually up in the loft dimantling the majority of my ‘antenna farm’ (some of them are deaf and not worth the coax) and installing the discone (it is as high as it can go in the loft space). I haven’t been up the loft for a while but was shocked by the amount of stuff up there. I did some rearranging but I really need to have a good clear out.

Well I can report the discone was worthwhile and while I have only used it for a few hours it certainly has improved my reception. I am now hearing the lower power mobile transmissions as well as the more powerful base transmissions from a number of more distant sites. The 70cm/2m amateur bands were also much more active last night and the RAF Waddington Radar is coming through much more cleanly.

The discone is a Sirio SD 1300 U and I feel my tinkering in the future will be a bit more productive.