The US SpaceX company successfully launched a new upgraded version of its Falcon 9 rocket from California’s Vandenberg Air Force Base. The vehicle, carrying the Canadian Cassiope research satellite, lifted off at 16:00 UTC on Sunday, September 2013.

In addition to the main payload two satellites, DANDE and CUSat, carrying amateur radio payloads were also launched into orbit, both satellites have been reported as functional and transmitting away. Last night I had an attempt at receiving DANDE.

DANDE stands for “Drag and Atmospheric Neutral Density Explorer.” Measuring drag and neutral particles in the lower atmosphere between 325-400 kilometers, DANDE will be measuring real time density, quantifying variations in altitude and over time, as well as providing in-situ model calibration data. The satellite is a low-cost density, wind, and composition measuring instruments that will provide data for the calibration and validation of operational models and improve our understanding of the thermosphere. Weighing approximately 45 kg, DANDE is classified as a nano-satellite that is about 18 inches in diameter.

The Colorado Space Grant Consortium (COSGC) has housed the project for approximately 7 years, in which about 150 students have been a part of the project through initial concept and design, to the current team of mission operators. There are two instruments on board which allow DANDE to make in-situ measurements rather than being passive or only carrying accelerometers. The subsystem ACC (Accelerometers) contains 6 accelerometer heads arranged in a circle which were built in-house. The NMS subsystem (Neutral Mass Spectrometer) also known as Wind and Temperature Spectrometer will survey the variety and quantity of numerous neutral particles in the Thermosphere. This data will be particularly interesting during periods of high
solar activity do to atmospheric effects seen at these times in the polar regions of Earth.

Using the most up to date TLE (from here) I worked out there was a nice late evening pass, so got out my homebrewed yagi, I posted a picture of it on my twitter account @nerdsville

Another evening and another home brewed antenna, must get a cheap drill press as nothing lines up properly! pic.twitter.com/hFNIAOmXOP
— Andrew Garratt (@nerdsville) May 10, 2013

I did manage to get a signal, but it was very weak so no chance of even trying to decode it. This wasn’t helped when a connector on the coax fell apart a few minutes before the start of the pass and I was estimating where to point the antenna. I am a bit out of practice!

Below is a snapshot of the waterfall, I have highlighted the faint beacon bursts. 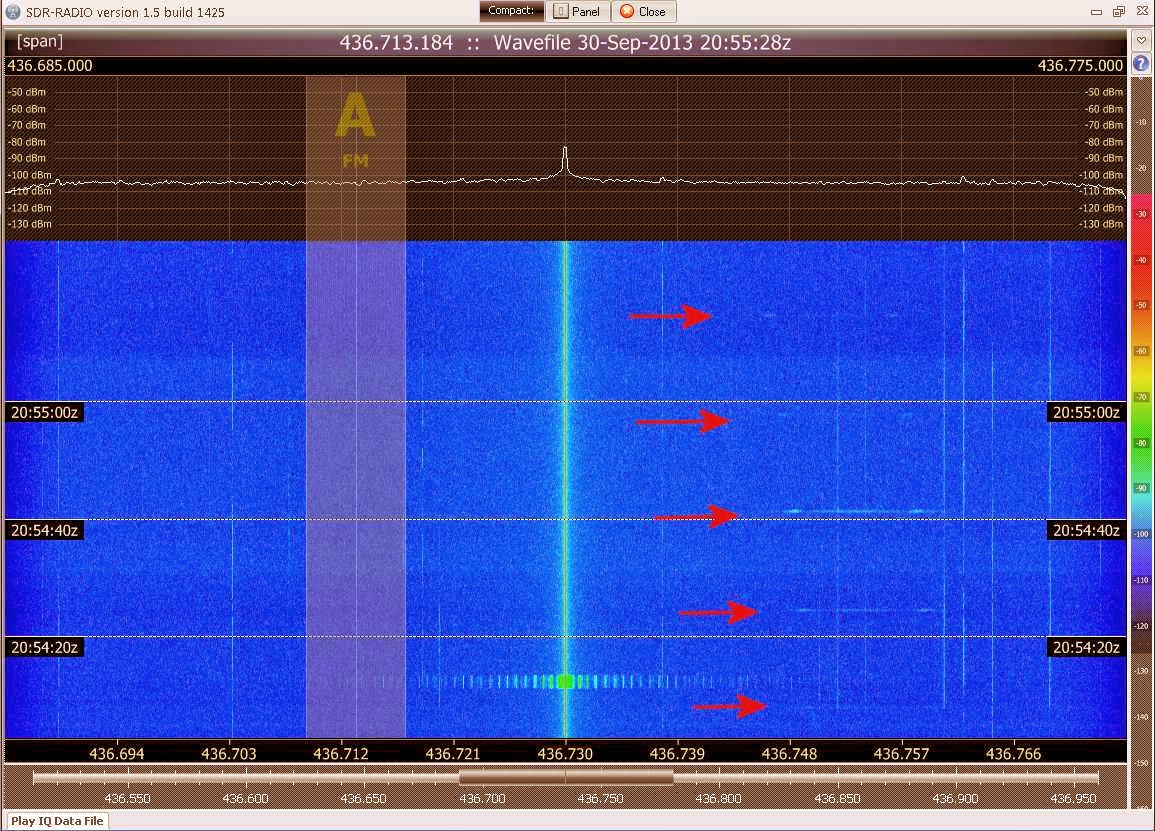