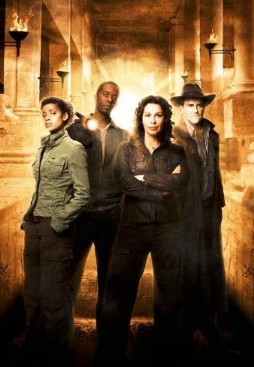 Watched the third episode of the BBC’s Bonekickers program, and to be honest I am amazed at how bad it is, but reading this review of last nights episode on the Guardian website I had to laugh at the last line!

Bonekickers (BBC1) is, it has been noticed, only a syllable short of bonkers. Hugh Bonneville, a decent actor tragically seduced by the temptation of a Harrison Ford hat, plays Professor “Dolly” Parton. Based, he says, on the archaeological adviser for the series, who “literally froths at the mouth”. Frankly, I’d hesitate to share a table in an all-night cafe with any one of them.

This episode, The Eternal Fire, was about the forbidden love of Boudicca and a susceptible Roman called Marcus Quintanus. Their affair was conducted, apparently, in the catacombs under the Roman baths at Bath, where the feretting archaeologists discover Boudicca herself. Crystallised, of course. There is some elementary Latin (“Regina mea!”) and contemporary Italian (“So! You call me because the fire in your loins is lit once more!”) and, as the catacomb fills with gas, a lot of coughing as if we were in for another adaptation of the Brontës. To be fair, the whole thing obviously cost about as much as Harrison Ford’s hat.

Personally, I think it would be much improved by the addition of a lovable, if cowardly, great dane.