Well the laptop is still working..

Hopefully yesterday saw the conclusion to the saga of my broken laptop.

Two weeks ago I had an attempt at reviving a sickly HP/Compaq 6735S a model which is notorious for GPU problems. Specifically the GPU BGA contacts break due to thermal stresses and shoddy manufacturing.

I had stripped the laptop down and using a IR rework station attempted to reflow the contacts with limited success. It survived one power up and then died again.

Like Robbie Burn’s famous spider I was not going to give up that easily so I stripped it down again and this time remembering the 7 Ps adage I didn’t cut any corners. 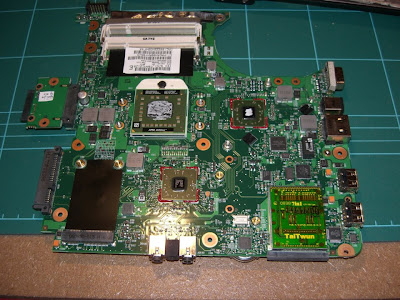 The picture above shows the motherboard after I removed it the first time, you can clearly see the GPU in the top right. Notice first the pathetic thermal bonding? Also you can see around all four corners of the chip what appears to be red cement.

Initially I was unsure of whether to remove this and indeed it appeared to be tough and nigh on impossible to remove so fearing possible collateral damage I left the cement in place and heated the GPU on the IR rework station attempting to reflow the joints.

This I believe was the mistake as this bonding would have prevent the chip from floating on the reflowed solder pads. So this time I did remove the cement as you can see below. I found heating the cement did make it malleable, the problem being how to heat it without damaging any of the surrounding components?

In the end I used a precision hot-air gun (which they also have at work) on a low-medium heat setting on a very low ‘blow’ setting. Using this and a couple of wooden toothpicks I was able to remove the vast majority of the red gunk!

Once removed I applied a small amount of flux around the chip, working it under the device and then used the IR rework station but on a much higher setting than before to ensure the solder properly melted. 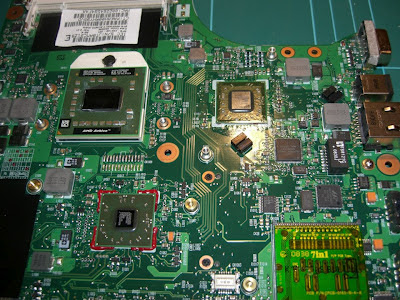 To my pleasant surprise the reassembled laptop booted and it has been successfully been powered down and rebooted several more times since. 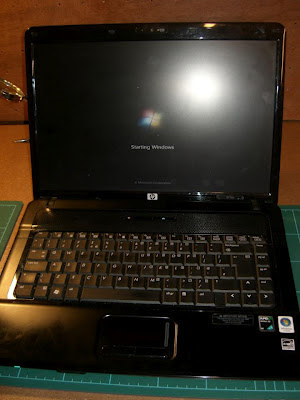 While not the prettiest of laptops, or indeed in the best condition it does at least have Windows 7 Professional on it and a nice big hard drive and 4GB of memory so should prove more than capable for my experiments – assuming she carries on working, and she does get a little warm!

Ever since I got my FUNCube Dongle Pro last Christmas it has been the main focus of my radio experimentation. I have used it on a number of computers including some quite old not very powerful machines and with different software applications primarily the SDR-Radio and HDSDR suites.

It was a little fiddly to initially set up but I have been impressed with its performance, it has opened my eyes and ears to what is out there on VHF and UHF, much more than I could ever monitor using my scanner receivers. Have a look at my previous postings.

Being SDR, with all decoding being done in software, it is effectively capable of all modes capable with the added advantage of having a variable bandwidth which is useful for data modes.

I have decoded images broadcast from orbit, received transmissions relayed via satellite and even bounced off the surface of the moon! As well as listening to all manner of terrestrial broadcasts.

In a word it is BRILLIANT.

It has its faults, or should I say limitations. It would be nice to have more of the spectrum available at one time and the front end filtering and rejection is troublesome at times. However this is more than made up for by its versatility and performance and it often out preforms my PRO2006 on the same antenna.

On the various forums and social networks it irks me to see people complaining about its performance but then they are usually the same people who go out and purchase a sub £20 RTL2832U based USB FM/DAB/DTV receiver dongle from eBay to use as a SDR and then complain they cannot get it to work or that its performance is lacking. But then that seems to quite common at the moment, everyone expects to just plug it in and it to just work with the minimum of understanding, involvement or experimentation but I digress.

Unfortunately Elonics the suppliers of the tuner chip in the FUNCube Dongle PRO are currently in liquidation and so they have struggled to produce any more units since July this year. This has potentially serious implications for the whole FUNCube educational project as there is no earth based component. Therefore the FUNCube team have instigated a redesign of the receiver and in doing so have increased its functionality and addressed some of the issues. This is the FUNCube Dongle PRO+

The official release of the FUNcube Dongle PRO+ was made during a presentation given to the AMSAT-UKInternational Space Colloquium 2012 on Saturday September 15. You can view the presentation by following these steps:

Or download the whole video of the presentation from
http://www.batc.tv/vod/AMSAT%20session2.flv

I spoke too soon I finally got hold of some thermal paste and reassembled the laptop. Everything looked fine it powered up and had installed all the latest windows and software updates it had missed during it’s illness. I closed the lid when I’d finished then when I opened the lid to use it again and it won’t power up! Flashes the cap lock LED five times to indicate the same fault! Piece of s…..

I did manage to get a decent capture of the ISS downlink during the ARISS School Contact on Wednesday morning before I had to leave for work. It was a bit cold standing out with the antenna but was worth it.

Seems to be lots of ARISS activity at the moment. There have been a number of school contacts over the last few weeks that have had downlink transmission from the International Space Station receivable over the UK and Europe. Tomorrow morning (September 19th) there is another one, but it is unlikely I will be able to have a proper attempt at receiving it.

However these are the last two downlink transmissions I managed to receive.

On a related note found this video today that made me smile can you spot the deliberate mistake?

Last  Saturday saw a huge tropospheric lift on VHF and UHF. The amateur bands were apparently buzzing with activity and scanner enthusiasts were reporting lots of new signals. Unfortunately I wasn’t at home so missed most of the action.

However I did manage to have a Sunday to tinker to my hearts content, I will post up some details of what I got up to when I have more time. I did get an excellent capture of the ISS downlink for the ARISS school contact and did some experiments with receiving some UHF Satcom stuff.

One thing I finally got around to doing was removing the motherboard from a sick laptop. It is a HP/Compaq laptop and suddenly died one evening. It would no longer boot and flashing a diagnostic code on one of the LEDs. The code was “GENERAL SYSTEM BOARD FAILURE”. The laptop is quite nice and was going to form a key component of the shack and so I was determined to repair it if necessary.

I did some googling and it seems the model in question is prone to failure of the GPU, or more specifically failure of  the contacts between the GPU and motherboardl. This is a common fault now in many devices especially those with components that run hot (Xbox/PS3 etc)

It is thought that the temperature and thermal stresses involved cause one or more of the contacts to break. On inspection of the heat sink over the GPU and CPU I was shocked at the poor mounting and application of thermal pads/paste which undoubtedly made the problem worse.

The suspected faulty GPU is mounted using a ball grid array, where the contacts are under the component the problem with this is you cannot easily repair or replace the contact without specialist equipment. What is required is to reflow the solder joints, heating up the component sufficient so the solder underneath melts reforming the contact.

Several methods of ‘homebrew’ repair are available using heat guns, blow lamps or placing the board in a hot oven but due to the delicate nature of the board and risk to surrounding components aren’t recommended.

As luck would have it I had access to a Infra-red rework station, this device has a high intensity infra-red lamp which heats the component and a heat pad underneath to pre-heat the circuit board. The advantage of this is there is no risk of movement to the components during the process and the temperature can be accurately controlled.

Well I had a go, and can report the motherboard is now working or at least now boots up. I just now have to replace the thermal bonding under the heat sink to hopefully prevent it happening again and then the small matter of putting it all back together!

Not much to report, but have had a few decent monitoring sessions with the FUNCube Dongle.

A couple of ISS ARISS School Contacts took place over Europe during the last couple of weeks, with another taking place on Sunday morning. I was in work during the passes but managed to remotely log in to my computer to do some ‘unattended’ SDR-Radio recordings.

Late last night there was a bit of a lift on VHF and managed to receive the GB3VHF 144MHz Beacon which while it may not seem very news worthy is given there is a huge hill in the way when you look towards Kent! I have received it before using the Yagi in an horizontal polarization. But last nights reception was via the discone in the loft, which was a first. Love the JT65B tones, very musical.

Earlier last night was also quite amusing when I stumbled across the Hucknall Rolls-Royce Amateur Radio Club who were trying to run an Amateur Radio Direction Finding Fox-hunt but were being completely blotted out by another, seemingly deaf, local operator pumping out 100W, though he did turn it down to 10W eventually.

Amateur Radio Direction Finding – Or Not! by nerdsville

Finally last weekend was the RSGB 144MHz Trophy Contest, again I got to get some decent SSB reception.