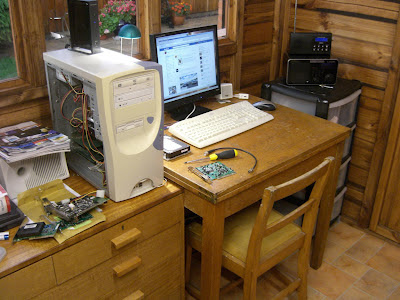 Again it has been a very busy month since my last post, but I did manage to get a few days to finally start sorting out my workshop/shack.
Just before the horrendous winter of 2010 struck I had purchased a 16′ x 10′ wooden workshop, in fact you can see it in the picture below the day after it was erected complete with a coating of snow! The workshop was subdivided into two separate sections a smaller 6′ x 10′ area with it’s own door for storage of garden paraphernalia and the remaining 10′ x 10′ section was intended to be a ‘man cave’ where I could keep my junk, set up a small workspace and experiment to my heart’s content without an accountability. The intention was to free up a small bedroom in the house and remove some of the accumulated junk from the loft! 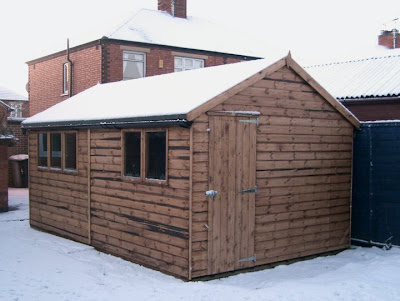 Well for the past 18 months despite my best intentions the workshop had become nothing but yet another store room! The first task was to empty the workshop and sort out the rubbish, almost immediately I became rather dispirited as it seemed a huge task, however after several temper tantrums, a beer or two and some ruthless decisions followed by several trips to the local tip I had got rid of a large portion of the contents.The remaining good stuff including tools, screws, nails and other items were sorted roughly into boxes to be properly organised at a later date.
I had already run an armoured electrical cable supply into the workshop but no internal wiring. The distribution/RCD unit, cabling, sockets, switches and lighting were still sitting in the screwfix box. Several hours of hard work in the sweltering heat and I had it wired it up with some decent lighting and power sockets. I also took the opportunity to install some proper thick moisture resistant chipboard tongue and groove flooring to strengthen the existing floor and that has been covered in some vinyl flooring for ease of cleaning. 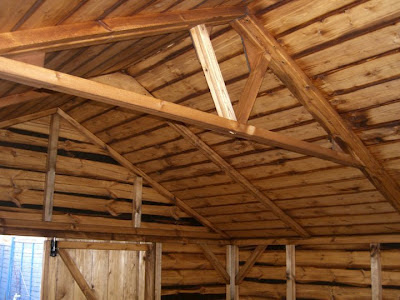 I had always intended to line out the workshop with plywood and insulate it but I had a change of heart, mostly due to cost but also for aesthetic reasons since it has a lovely rustic wooden feel inside with roof beams and the tongue and groove panelling, I will probably regret the decision in the winter, but given the fact that everything stored in it has survived two harsh winters with no signs of damp I have left it alone for now.
I have furnished it with some unwanted items including a nice sturdy table, chest of draws and some old book shelves and have gradually been moving my junk into the workshop. I am now in the process of sorting out some more shelving and a soldering station and workbench so I can finally start tinkering again!
I have also installed a wireless access point configured using WDS to connect to the main house WLAN and that seems to be reasonably fast and reliable and have an old PC which gives me access to the Internet and my music library I can listen to without being told to turn it down!
I should add the whole shed/workshop are protected by a proper security alarm with PIR and door contact sensors.