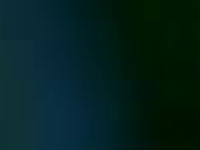 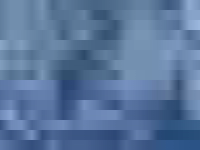 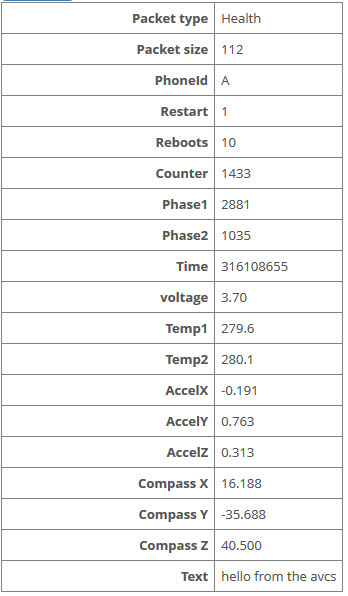 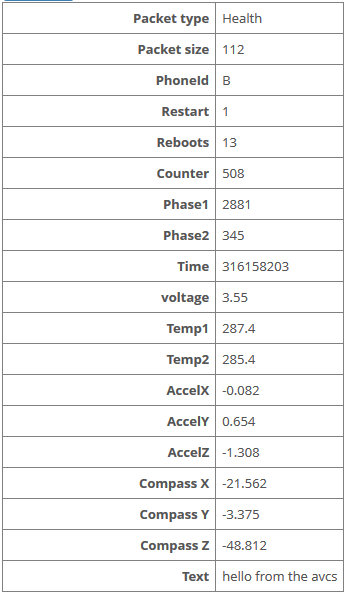 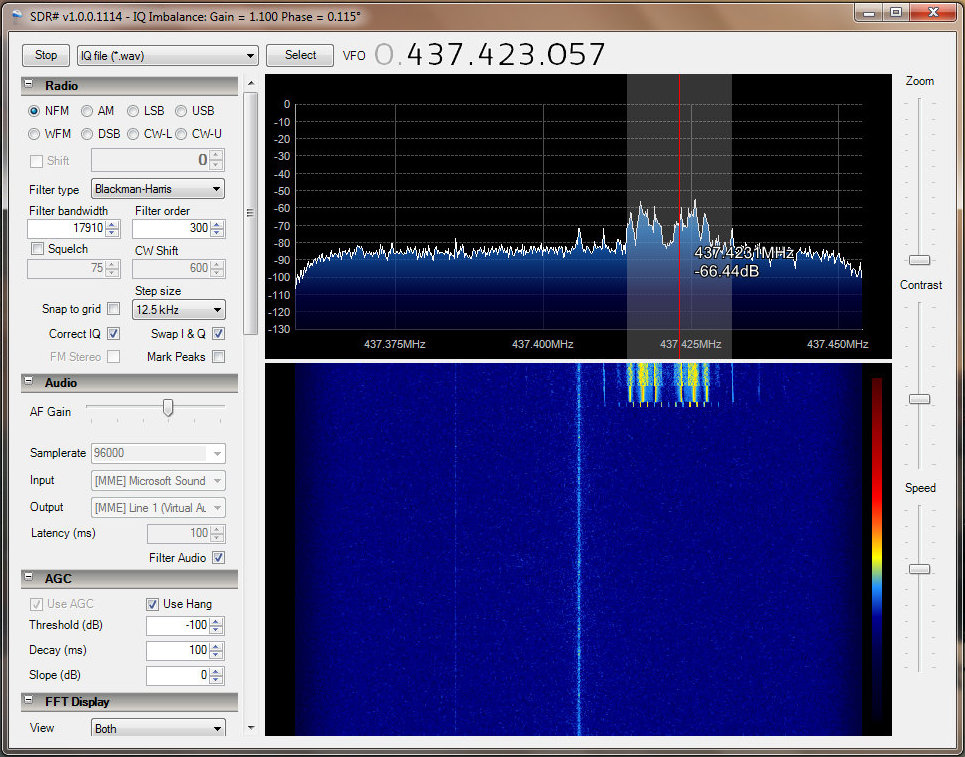 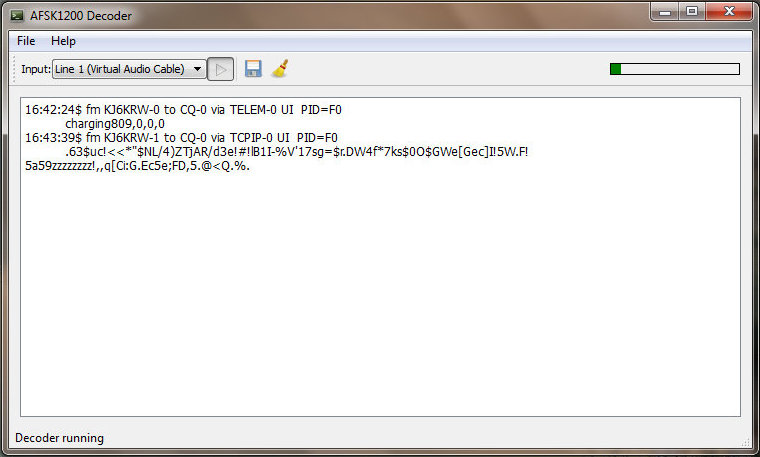 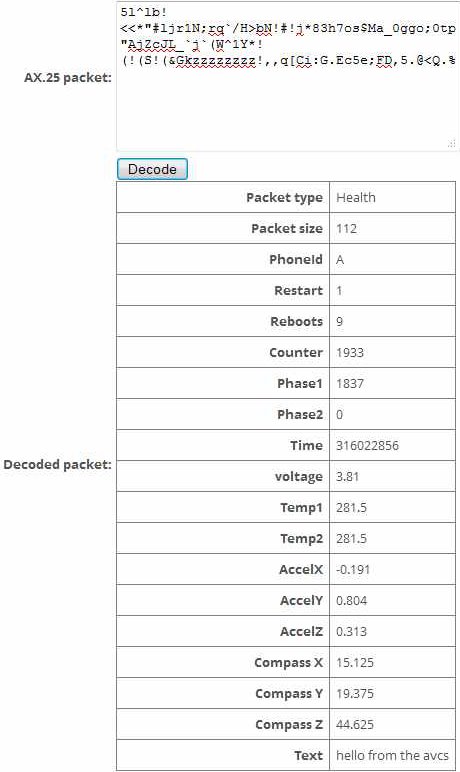 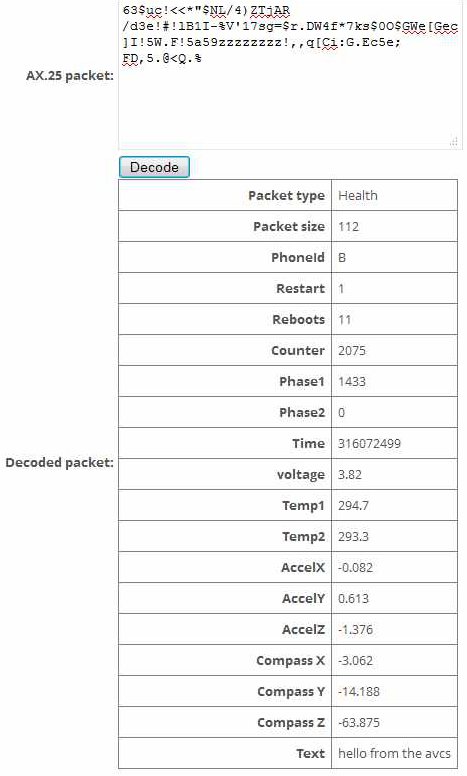 This weekend I was supposed to be off to North Yorkshire for a weekend dog agility event. Unfortunately due to a family emergency we were forced to change plans. So yesterday I found my self at home and in between doing some much needed odd jobs I had the chance to get out the 2 meter YAGI and capture a couple of passes of those Russian navigation satellites I blogged about last week.

Each pass lasted the best part of 15 minutes from the first faint signal acquisition to finally losing it as it sped out of range. Below is an except from the first pass at around 10:00 UTC. The signal is clear and the different tones used can be clearly distinguished. These captures should prove useful for testing any decoder.

Russian Parus Satellite 27-11-2011 by nerdsville
It is quite fun standing with the antenna and pointing in the direction where I expecting the satellite to appear and then once the signal is acquired then fettling it during the pass to maintain the best signal strength.

Not sure what my neighbours are making of all these antics, perhaps I should try to find that extension cable so I can use headphones to monitor the pass rather than letting it blast out the laptop speaker! It must look odd me standing there waving an huge antenna about and receiving strange foreign voices (from the ARISSat-1 satellite) and now this weird ‘morse code’

At the weekend I attended a dog agility show in the depths of Cambridgeshire, there is always a lot of waiting around in between runs and so I was sat in the foggy car park. To pass the time I had taken along my PRO-26 scanner. I monitored amateurs on GB3PY and GB3OV chatting about the tropospheric ‘lift’ they were experiencing, found a few taxi firms complaining about the fog, some hospital paging but it was pretty boring.

I was idly scanning around when I happened across a strange signal on 149.9375Mhz.  I could hear a definite doppler shift in the tones so it was a satellite. Checking my pretty useless 9th Edition UK Scanning Directory the frequency was identified as being in the Russian radio navigation and satellite beacon band.

Over the last couple of days I have done some research and discovered it is the Russian Parus Navigation System which dates back to the 1970s. The transmission was in fact on 149.940Mhz but I had the scanner set on 12.5kHz stepping. I have been trying to track and capture more of the signals but had been hampered by a persistent source of interference at home, but did get some audio

I found an excellent thread on the UK Vintage Radio Repair and Restoration Discussion Forum with some information supplied by Alan Cordwell who is/was developing a Java decoder.

These satellites are very easy to receive on a handheld scanner though obviously you’ll get better results on an external antenna. The tx power is about 10 watts (+40 dBm) so with a 140dB path loss on an overhead pass (alt = 1000 km) you’ll get about a microvolt in a zero-gain antenna, which is enough to hear.

The VHF frequency carries the time data and orbital parameters for the current and other satellites. There is a second transmission on around 400MHz- its in an 3:8 ratio with the VHF carrier frequency. This is unmodulated- i.e cw. It is used to measure the Doppler shift, to determine when the satellite is dead abeam the observer. The transmitted time, and the orbital data, tell you where the satellite was in the sky when that happened- or, put another way, if you know where the satellite is relative to you, then you know where you are- well, you’re somewhere on a line at right angles to the satellite’s track. You then wait for another satellite, and obtain another poition line- and where they cross, then bingo- that’s where you are. Hope that makes sense!

Parus could give you a fix in 1-2 hours; and had an accuracy of 100m anywhere on the earth’s surface. Okay that’s poor compared to GPS, but in the 1970’s it was revolutionary.

It isn’t just Doppler that determines the receiver bandwidth, although you do take it into account. Most satellites have a much higher FM deviation than a normal narrowband FM transmission- the NOAA met sats are about 19kHz deviation I think- and these nav sats are higher too, but not that much. But for decoding, you do need to resolve the 7kHz second markers which a narrow filter won’t easily do.

I would like to decode these signals at some point, providing I can sort out reception. I have found a number of historical guides and projects in addition to the articles linked to in the thread above.