Following the eggcitement of last week I am been taking it a bit easier this weekend preparing for some portable operation in Scotland.

I have made a linked dipole inspired by the ones sold by SOTAbeams, it is a simple inverted vee supported by a 9 meter fishing pole the wire elements are made of sections which are joined together depending on the band required.  I have made a two band version, 20m/40m and it tuned nicely using the analyser.

As a backup I have also revisited the “Magitenna” which disappointed last time I tried to used it. Firstly I replaced the original wire which was too heavy for the low power I run and is very prone to kinking. 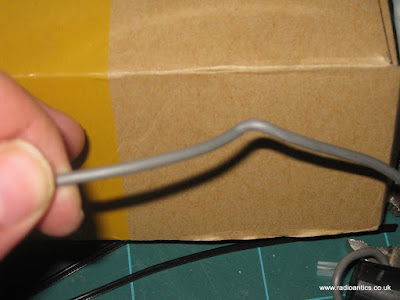 While doing this I discovered that the terminal post on “the special matching unit” was simply turning when I tried to tighten the wing nut. This pointed to a broken or at best poor internal connection and I was forced to open up plastic box to make a repair, sadly “forced” was the operative word.

One of the four screws was inexplicably super-glued in place and being cack-handed I soon ruined the head trying to remove it and had to drill it out. Once the screws were removed I then found the lid too was glued in place at several points and had to prise the lid off trying to minimise any damage in the process.

Given that nearly all other ham equipment I own is designed to be serviceable, including rigs worth several hundred pounds I found this annoying and unnecessary for a simple antenna, especially as the ethos is for amateurs to experiment and modify things. It certainly wasn’t glued for weatherproofing as it would be have sealed all round, it could only have been to stop it being opened. I could understand this if it were protecting some patented, copyright design but it wasn’t, behold the magic within the “special matching unit” nothing but a simple un-un which I suspected already. 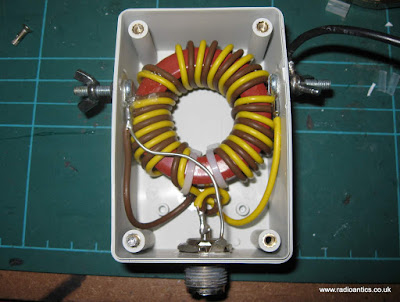 Anyway I was able to tighten up the simple screw and bolt and ironically I used some epoxy resin on the screw head to try to stop it coming loose again. Hopefully this loose terminal was the reason for the poor performance last time. 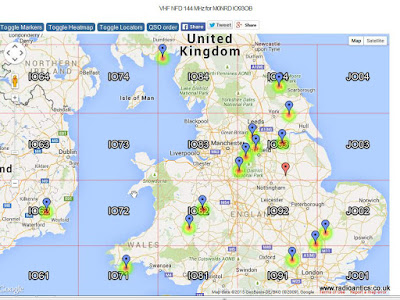